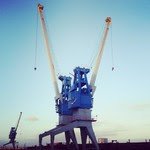 Today I came across a great timelapse shot by Rotterdam photographer Ben Kleyn. I’ve been living in Rotterdam since 1995, and was born just south of the city. I love it and it’s getting better and better. Not sure if you know the new Koolhaas Rotterdam building or the new Market Hall that is being built but, well, they are awesome!

One of the things Rotterdam is famous for, and which makes my logistics heart beat faster, is the Port of Rotterdam. Until 2002 it was the busiest port in the world, and it still is one of the largest in the world. It is the number six port based on cargo throughput and more than 11 million containers will be handled in the port this year. A large part of them will be handled at the ECT terminal. The European Container Terminals, which is what ECT stands for, was the first container terminal in the Port of Rotterdam, handling the first containers in 1963. It was at one of the ECT Terminals that the timelapse below was shot:

If you want to see more of Rotterdam, and you should! ;-), then also watch this one: