amazon has revealed a new Prime Air drone design on the Prime Air page and they’ve let former Top Gear host Jeremy Clarkson reveal the new design in a short video, which shows actual footage of a drone delivery. All steps of the process are followed. The item is ordered, picked, packed and loaded into, yes, into the drone. The drone then flies off to deliver the package in a suburban neighborhood. It is one of the more viable designs I have seen yet.

The first design, which featured in my blog post on the ship-to person system that drone delivery enables, looked like a traditional drone. As I’m writing this I’m realizing that I’m already thinking in terms of traditional drones. Anyway, it works well for smaller items, but has one disadvantage: the shipment is outside of the drone, and this has to be packaged in a small container to protect it from the weather. The container adds additional cost, and increased complexity, as the container probably needs to be returned. A video of the initial design:

The second design, which you can see below, looks much more like a plane. Although it looks like a plane it takes of and lands like the earlier model.  It has an actual cargo bay in which cardboard boxes can be loaded, which eliminates the need of the plastic container. It can deliver package of up to 2.25 kg (5 pounds) in a range of almost 25 kilometers (15 miles) around the warehouse where it is based and will have a cruising altitude of around 120 meters (400 feet).  According to the video the drone will use sense and avoid technology. It scans in all directions and steers clear of any obstacles, inanimate or moving.

The same sense and avoid technology seems to be used to check the area where the drone is supposed to drop off the package. A mat with an amazon logo on it marks the spot where the shipment can be dropped. If a smart phone can scan a QR code on the side of a truck, from a car overtaking it (don’t worry, I was in the passenger seat), the camera on a drone can recognize a mat with a logo near or at its final destination.  This is different from the first video, where the drone simply lands and drops the package off. There is however no disclaimer stating that it is footage of an actual delivery, so parts may have been staged. The landing pads I wrote about in December of 2014 now seem over-engineered in comparison.

Cleared for Take Off?

There are strict rules for anything moving in airspace. Each country or region has its own rules and regulations, and regulators all over the world are working on guidelines that would make commercial drone delivery (and other drone related services) legal. amazon writes the following on the Prime Air site on airspace safety:

We believe the airspace is safest when small drones are separated from most manned aircraft traffic, and where airspace access is determined by capabilities. To learn more, view our airspace proposals here and here.

The two graphics below come from both documents referenced in the quote: 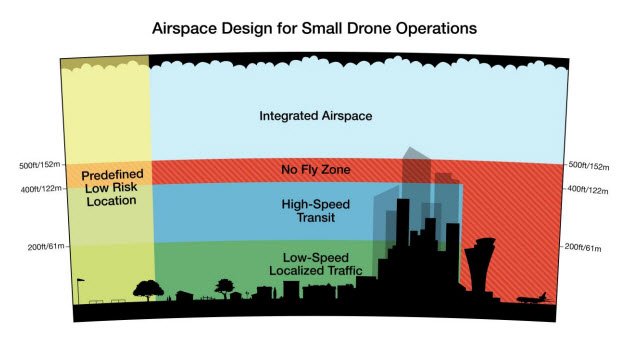 The relationship between vehicle capability, Concept of Operations complexity and airspace access: 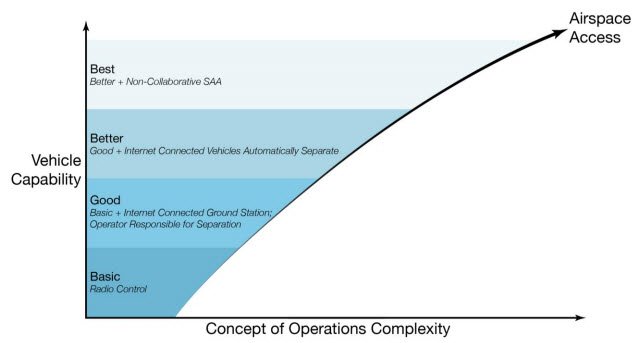 amazon doesn’t mention timelines when it comes to actual commercial Prime Air deliveries, but looking at the video the only thing holding amazon back seems to be the rules and regulations. The technology apparently works.

I can’t wait to get my first shipment delivered by drone.  I wonder if, around the time Prime Air goes live it will also come to pick up returns…