Climate change. It is real and it is not going away by ignoring it. We have to step up and actively do something. There are many ways to do this, and one the most important ones is reducing carbon dioxide emissions. If there is one logistics component contributing heavily to these emissions it is trucking.

A Dutch transportation startup, based in Rotterdam, intends to turn this around. BREYTNER is the first zero emission trucking company in Europe, and maybe even in the world.

I recently met with two of its founders, Marie-José and Jeroen Baartmans to talk about their plans for the future. And to see and (not) hear one of their trucks of course.

The challenge that is air quality

“We see today’s air quality problems as a challenge in stead of a limitation”, is one of the first things Marie-Jose tells me. One of the areas where trucks are impacting air quality the most is in cities. It is one of the reasons that many European cities have instated environmental zones in and around their city centers. Rotterdam is one of those cities.

The following vehicles are not allowed in the environmental zone of Rotterdam:

Diesel trucks that are allowed in Rotterdam, still have a negative impact on air quality. Only a zero emission truck would have no impact. That is why BREYTNER has signed a deal with the city’s Green Deal 010 Zero Emission City Logistics initiative. With their zero emission trucks BREYTNER is the perfect partner.

The range on these trucks is around 200 kilometers, which makes them perfect for city distribution. BREYTNER does both B2B and B2C deliveries. Among the current customers are several larger retailers. The trucks replenish the stores and pick up returns. 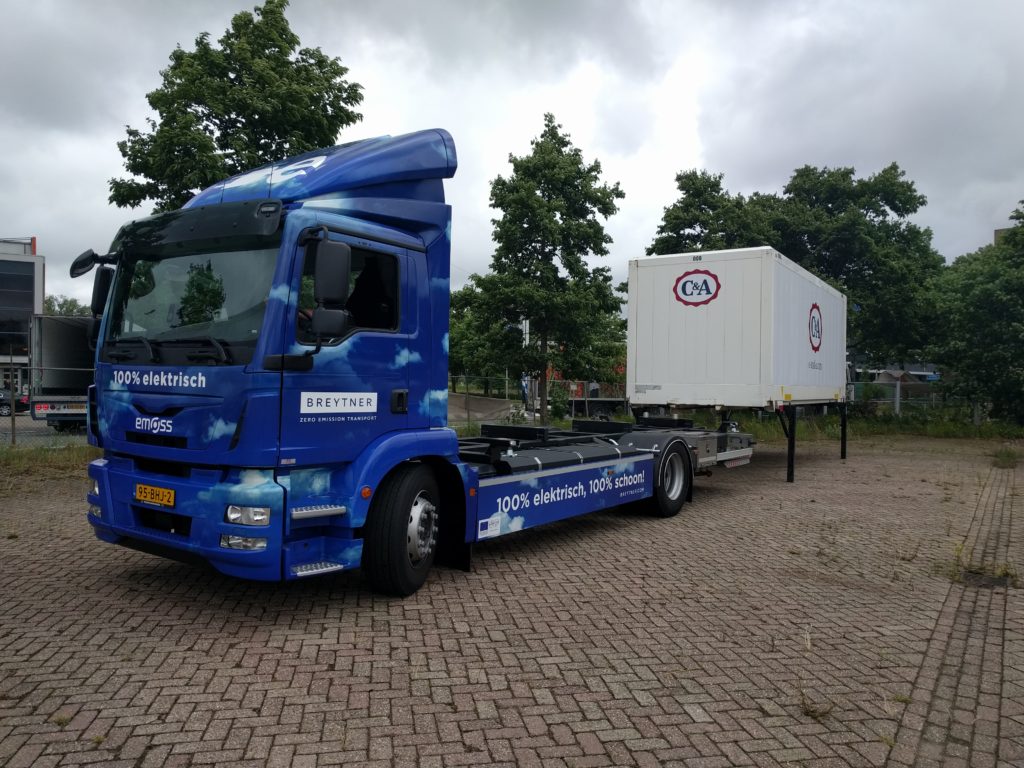 Diesel out, electricity in

The trucks are modified diesel trucks. To my surprise BREYTNER has to buy regular diesel trucks, which are then modified. The diesel engine is taken out and replaced by an electric engine and battery. That is why, just looking at the truck, it isn’t immediately obvious that it is an electric truck. But when the trucks pulls away you know immediately. It makes almost no sound!

It’s deafening, or is it?

I’ve taken a short ride in one of the trucks and made a short video. Please find it below. Just to be sure: there is nothing wrong with the sound on your device. It is that quiet. The windshield wipers actually make more noise than the engine…

For those of you interested in the specs of the truck:

The truck weighs 19 metric tonnes and is a fully air suspended MAN TGM 4×2 truck. It is then modified by Dutch electrical engine specialist EMOSS in Oosterhout. They install a 240kW electrical engine.
The battery is a 200kWh lithium battery, which takes about 5 hours to fully charge. A full charge gives the truck a max range of 220 kilometers. There a lot of factors that can influence the max range. The quality of the driver, traffic, the payload, even the outside temperature.
I think this is a great initiative and I hope that more shippers choose this sustainable mode of transport.